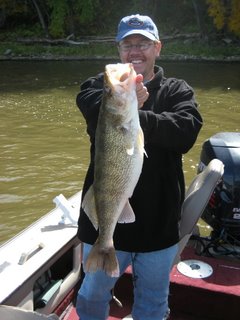 Boatrule Photo of the Week:

Some of the best monster walleye fishing of the year occurs during the fall months. Most of the large fish caught during this time are females, this one is no exception - check out the belly! These beauties are devouring large quantities of food to help nourish their developing eggs.

The key to consistent fall walleye action is to match your presentation to the water conditions, weather, and the bit. This really is KEY! With the ever changing weather conditions, fall walleye action can be anything but predictable. Most of us have been told that the big ones are usually caught during the poorest weather conditions. That said, remember, unpredictable. Case in point, take our long time fishing buddy, Wade. He caught this monster 'eye on a bright day.

This walleye was caught "several miles" south of St. Paul, Minnesota while fishing the Mississippi River on Friday, October 6th. She came in at 29" - 9 lbs.
Posted by Minnesota Steelheader at 9:32 PM 1 comment: 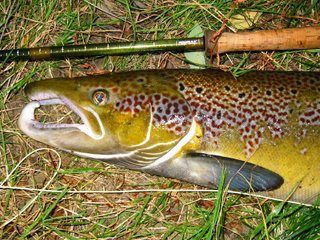 Our buddy Kev over in the UK sent us this great shot!

"As our salmon & trout season comes to an end there was just time to catch that last salmon - measured with the rodrule at 33" approx 15lb by my fishing partner." UK Kev

Thanks for the pics. 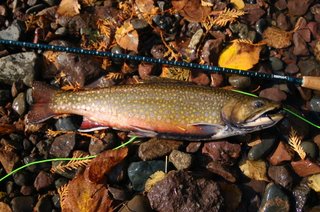 With the close of the 2006 Minnesota inland trout season came beautiful fall colors and peaceful weather along the North Shore.
Though most of the North Shore Streams were mere trickles slowly gurgling down to the big lake, a few of them carried enough water to welcome the early bird fall spawners. The rivers we fished were only a few. Some secluded inland streams and some of the mid-shore Lake Superior tributaries. The Rivers along the North Shore this time of year are prime time for Pink Salmon, Coho and even coaster brook trout. Read your regulations first! The brook trout season below the posted boundaries closed Sept. 5th. If you catch one, get her back in the water ASAP!

Back to the Pinkies… they are in. We fished a few of the rivers between Silver Bay and Cascade Park. Pinks were in all rivers fished and in good numbers considering the low, low water. We found the deep holes to be the most productive areas. Good old Hercules found his way down in these holes and managed to catch some rather bright pinkies, and a nice 21” Coho.As for the nice brookie pictured above…. Let’s just say he was worth the entire trip. He was not too happy when an egg sucking leach passed by; he crushed it! Measuring in at 16”, this boy went off too spawn another day.
Posted by Minnesota Steelheader at 9:55 PM 1 comment: